Back to TCM on a dreary weekend

When the movie theatres just aren’t offering much to see, and the weather is dreary and you don’t feel like going outside, there’s always Turner Classic Movies (TCM).  Last Friday and Saturday, lying on the couch, I ended up watching a lot of films…

Let’s start with Orson Welles’s 1962 take on Franz Kafka’s The Trial. I’d caught glimpses of this before but never the entire thing. The Trial opens with the dramatic Adagio in G Minor by Tomaso Albinoni, a piece that resonates throughout. Anthony Perkins plays Joseph K., the bureaucrat who is arrested without knowing his charges. The entire film is made as an extended dream sequence, and that’s its brilliant aspect. Dreams are absurd with no apparent rational endings. The film is set in the then abandoned Gare D’Orsay railway station in Paris (though we don’t know that), now a fabulous art museum. Welles loved the building’s long passageways, cramped corridors and endless rooms opening on to others. The film also stars Jeanne Moreau, Romy Schneider and Welles himself as The Advocate or Joseph K’s would be lawyer. Part of it was filmed in Yugoslavia, where an exhibition hall was converted into a vast office with hundreds of office workers pounding away on their typewriters, faceless mass organization style. The film is draggy in parts and overly long but its recreation of a dream, the shadowy and dark cinematography by Edmond Richard, and Perkins’s acting, are what makes this a classic.

Let’s now go to 1961’s The Roman Spring of Mrs. Stone (directed by famed New York theatre director José Quintero, his only film), based on the novel by Tennessee Williams and starring Vivien Leigh. Leigh has never seemed more elegant and that's saying something. As Karen Stone, a middle-aged recent widower, and theatrical star, she embarks on a reprieve from the mania of the New York theatre world - an indefinite spring vacation in Rome. With her riches she acquires a luxury apartment, which happens to be at the top of the Spanish Steps. Living a quiet life, she occasionally rendezvous with old friends. At one point she is set up by a high class madame (Lotte Lenya) who runs an escort service for the wealthy. The escort is Paolo (Warren Beatty, effecting a convincing enough Italian accent though you still might smile). However, Leigh as Stone is the entire story, and she, and it, are magnificent. It’s not that a whole lot takes place in the plot but that’s what also makes the film excellent. Leigh’s Stone is glamorous, smart, withdrawn, icy and ambiguous, all expressed through the most subtle facial looks and gestures. This is a film that is wonderfully slow and studied and the viewer accordingly hangs on to every slight moment.

Other fil
ms I watched were The Secret Garden (Fred M. Wilcox, 1949) starring child actor Margaret O’Brien as Mary, Herbert Marshall as her strange and estranged uncle, and a very young Dean Stockwell as Mary’s sickly and tempestuous cousin. The story, based on the 1911 novel, is a children’s fable for the ages. In it, in essence, the children take over a stuffy old mansion with stuffy old people and, yes, an overgrown garden, and transform it and them……Picnic at Hanging Rock (Peter Weir, 1975) is among the first of a genre of Australian films that captivated the art house cinema world through the 1970s and 80s. Based on what might have been a true story, a girls'  school class circa 1900 goes on an afternoon picnic to Hanging Rock, a remote geological formation. As the afternoon transpires some of the girls go missing. The remaining two-thirds of the film focusses on h 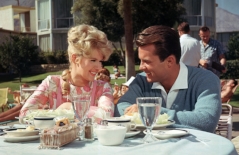 ow the survivors deal with this trauma. The plot is circular and inconclusive and while elements like costumes are excellent and Russell Boyd’s cinematography creates a dreamy languor, the film is overall unsatisfying……For sheer early-1960s madcap comedy 1963’s Palm Springs Weekend is another prime example of the genre. Directed by Norman Taurog (who made a number of Elvis films) and starring Jerry Van Dyke, Jack Weston, Connie Stevens and Stefanie Powers, the “kids” are on a weekend break from college and you can imagine the antics……Finally, William Wyler’s 1939 Wuthering Heights with Merle Oberon, Laurence Olivier and David Niven, recreates pivotal moments of  Emily Brontë’s romantic triangle of Heathcliff (Olivier), Cathy (Oberon) and Edgar (Niven), in almost “it was a dark and stormy night” mode courtesy camera work by the famed Gregg Toland. But you don’t recognize Niven without the moustache!

Posted by Windsor-Detroit Cinephile at 3:10 PM