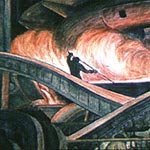 I haven’t seen a whole heck of a lot of films lately but here’s what I have seen, and they’ve been a little special....At the Charles H. Wright Museum of African American History, as part of the museum’s Liberation Film Series, the 1970 documentary Finally Got the News (left). This is a film I’ve always wanted to see. Growing up in the Windsor-Detroit area in the early 1970s was a very formative time. Detroit in those days was a cauldron of racial and radical politics and this film exemplifies both in the context of the era’s labor movement. It’s about what was then the League of Revolutionary Black Workers, which organized within the auto plants and took confrontational stands to both management and the traditional UAW over the treatment of black workers. Says General Gordon Baker, one of the key labor organizers of the era, the movement "pretty much brought Chrysler to its knees." The soundtrack features Miles Davis's Bitches Brew. The film also focussses on a very young lawyer but soon to be Detroit radical icon, Ken Cockrel, father of current Detroit councilman Ken Cockrel Jr. For more about the film go to http://icarusfilms.com/new2003/fin.html. For more about the – free – Liberation Film Series go to http://thewright.org/liberation-film-series. Each screening features a panel discussion.....

I’ve always loved short films and can’t understand why they don’t get more screen time, even ones starring famous actors. Like those I saw last weekend and which continue this weekend at the Detroit Film Theatre. The DFT of course always shows its Oscar nominated shorts during Academy Awards season. But this series, called Stars in Shorts, features seven films starring Keira Knightley, Lily Tomlin, Colin Firth, Judi Dench, Julia Stiles and Jason Alexander. I like short films because they force directors to pack a lot into a small segment of time, and usually deliver punchy or unexpected endings. But I was little disappointed in this collection. Sexting with Julia Stiles (above left) was the best - a sort of embrrassing run off at the mouth - followed by Neil Labute’s After-School Special. It's another in Labute's look at the scary edges of human relationships. And Judi Dench in Friend Request Pending is abou online dating for the old (okay, well-preserved septuagenarians). I missed the first film The Procession starring Lily Tomlin but hear it’s hilarious. For more go to http://www.dia.org/auxiliaries/event.aspx?id=3382&iid=&aux_id=14&cid=100.

Was Seven Psychopaths written by a schizophrenic?

Seven Psychopaths grabbed $4.3 million at the box office this weekend after opening Friday. Probably it’s because the word “psychopaths” is in the title. Okay, Colin Farrell is also in the movie and we know that name will draw fans aplenty (even maybe women who don’t like violence). Not to mention our old friend Christopher Walken, almost playing a parody of himself. (Actually he’s the best thing in this.) And, hell, there are people like Sam Rockwell and Woody Harrelson. So you’ve got all these big name alpha male actors and a movie with a spin like it’s something out of Quentin Tarantino. Few people, however, probably know that it’s some foreign – Irish by way of England – playwright, Marty McDonagh, who wrote and directed the whole thing. Apparently, as screenwriter and director (he also did 2008’s In Bruges also starring Farrell) McDonagh’s the best thing that hit Ireland since the offshore oil boom, and we know what happened to that. But that’s my point. I really disliked In Bruges – well, more like it seemed extraordinarily boring and pointless with bad attempts at humour – and you can triple my feelings (foregoing “how do I really feel”) about this mess..... It’s been awhile since I’ve actually felt ripped off by a movie. Maybe In Bruges was like that. Like In Bruges, Seven Psychopaths is an attempt to be a comedy with a bunch of harebrained bad guys mixing it up. The National Post last week said this was better than Tarantino. Yeah, that’s because they’ve probably got a bias towards supposedly literate people “who write for the stage” (said in an English accent). Seven Psychopaths would have been great if it actually was a send up of Tarantino, not that Tarantino needs to be sent up. And it’s not even that this movie’s gratuitous violence is offensive. It’s just that there’s no point to the violence (is that redundant?). Farrell as Marty plays an LA screenwriter whose next film is called Seven Psychopaths, only he can’t come up with descriptions of the psychopaths let alone a plot. (He does want them to be kinder and gentler, however – ha ha.) His very real psychopathic friends, it turns out, help him. The film is a mishmash of presumably real or imagined crime scenes, all fitting grist for the screenwriter’s mill. But the movie jumps all over the place with an extraordinarily disjointed plot. Ah, the schizoid bit. And the jokes – or entire joke of a film, if that’s what their meant to be – are lame. Not only should audiences get back their time and money (I’d take a triple refund, with which another audience member heartily agreed) over this schlock. But good 'ol – and very esteemed (use English accent again) – director McDonagh should be relegated to writing (with English accent) for the stage. In any case he seems to have wasted a couple years of his life with this. But box office receipts are good, no?﻿
Posted by Windsor-Detroit Cinephile at 2:07 PM No comments:

I obtained a screener of this because it was supposed to have come to the Main Art Theatre. But its appearance was cancelled. Still, I had the DVD in my hands and was eager to review it. So here goes....Hello I Must Be Going appears the first major full length effort from director Todd Louiso. It’s competently done and the acting – starring Blythe Danner, Melanie Lynskey and Christopher Abbott – is quite good. Lynskey (Amy) is a 30-something divorcee who has moved back with her parents in affluent Westport, Ct., a commuter ride from the Big Apple, where she had been married to a high-flying entertainment lawyer. Dumped from that marriage she is depressed and can hardly get out of bed. Her parents (Danner as Ruth & John Rubinstein as Stan) keep coaxing her to get back into life - or get a life - and especially dress better,  because there's an important dinner party coming up with potential for Stan, a lawyer, to snag a major client and retire prosperously.....When Amy meets Jeremy (Abbott), a young actor, at said party, they fall in love, or kinda. Jeremy hits on Amy but, as the older woman, she’s reluctant to get involved. Still, they develop a romantic relationship as the summer in the ocean side community winds down.....There are problems with this movie. Like oh-so-many independents its plot is a bit tired. How many films have there been about a maturing adult returning home after a crisis, sleeping in her old bedroom, hooking up with old high school friends? The characters are also par – the quiet, dreamy but intelligent Amy and the moody artsy Jeremy. Then there’s the score, with beautiful mainly female folkie alt-rock lyrics. But, again, even this is symptomatic of the omniprescent trying-to-find-oneself indie film theme......It’s also a bit of a mystery why so many of these films are set in wealthy communities where the middle class is afflicted by boredom and angst, as is mom Ruth and one other character, a therapist (natch!). No, I don’t think the film was making any political statement.....The best thing about Hello surely is Lynskey, a New Zealand native who’s got an arm’s length of film and TV credits and is currently in The Perks of Being a Wallflower. She’s a scene stealer, no doubt, and her moods and looks are ones you keep thinking about after the movie is over.   ﻿
Posted by Windsor-Detroit Cinephile at 11:29 AM No comments: 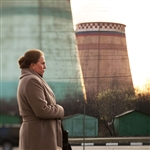 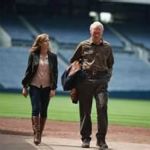 I made it to two films in theatres over the past couple of weeks and caught a couple on DVD. The best of the bunch was Elena (Andrey Zvyagintsev, Russia 2011) shown last weekend at the Detroit Film Theatre. It won the Special Jury Prize at Cannes. Its score is by none other than New Age/Classical composer Philip Glass. And it has a noirish plot. So I bit. And wasn’t disappointed. The film opens with long, studied shots on particular scenes – the balcony of a luxury high rise condo, the interior rooms of the ultra modern apartment. Gradually we see the denizens of the household wake up – a retired couple – Elena and Vladimir – who sleep in different bedrooms and who seem to have two very different lives. Vladimir was some type of successful businessman and investor, obviously well to do. Elena is a retired nurse. On the surface they seem mismatched. Elena spends her days commuting to a poor suburb where her deadbeat son and his family live. Vladimir happens to be supporting this extended family but to his increasing disgust. Elena indulges and is in fact an enabler or her son’s sloth. He doesn’t work, he and his wife forget to use birth control and as a result keep having more children. This is a very simple story but also very moralistic. It’s also about still waters running deep. The studied shots make the film, along with Glass's score, suspenseful and menacing.....I also caught Trouble with the Curve (Robert Lorenz), Clint Eastwood’s latest role as a crotchety old man who’s about to be put out to pasture as a once great major league scout. Eastwood as Gus Lobel is losing his sight and Atlanta Braves’ management thinks he’s losing judgment when it comes to recruiting players. There’s talk of retirement. For anyone who doubts classic schmaltzy Hollywood movies are dead you can take comfort in this film. There’s our hero - Gus, and the folks who are about to do him in – management. Throw in a side story about Gus's daughter (Amy Adams) joining him for a last recruiting run, a love interest between her and another scout (Justin Timberlake), and you have a neat Hollywood package of old. Nothing wrong with that. But the clichés are a little much.  Like when Gus slams into his garage because his eyesight is failing. Or when he checks into a fleabag motel. Don’t think an organization like the Braves would put him up in that kind of accommodation.
Posted by Windsor-Detroit Cinephile at 1:03 PM No comments: