Schlock Tuesday - Now You See Me

Schlock Tuesday is an occasional post in which I take myself to Tuesday cheap night at Windsor cinemas, where the theatres are crowded, the atmosphere is often a zoo, and audience members have never heard of the admonition to shut up during the screening.
Last night it was Now You See Me, the Louis Letterier No. 5 at the box office, which seemed the best of a bad lot screening at the local multiplexes. (Note: that’s usually the case on Schlock Tuesdays.) For once I agree with the critics, who gave the movie a subpar 49 per cent on Rotten Tomatoes, rather than the audience fave 74 per cent. That’s because there’s a lot less here than meets the eye – ha ha – because this is a movie about a group of elite magicians. The best thing is Letterier’s direction, which is crisp and fast-paced, including even an old school ever-loving New York City car chase. The problem is that I thought this movie would have more depth. I thought, from the synopsis, that these magicians (Woody Harrelson, Jesse Eisenberg, Isla Fisher and Dave Franco) had some political purpose in mind. That they were modern day Robins Hoods, exacting their tricks on the rich and distributing money to whomever. That only happens once, in New Orleans, where they rob – on stage - their sponsor Arthur Tressler (Michael Caine) because he’s an evil insurance magnate and didn’t pay out to homeowners who lost during Katrina (the 2005 hurricane that, in popular media, never seems to go away). Other than pull a couple of other bank heists - spectacular though they are – the benefactors unknown (themselves?) that’s about it. The movie has lots of surface shazam and thrills and spills. But it doesn’t add up to a whole lot of story. The big surprise (spoiler alert!) is that their pursuer, FBI agent Dylan Rhodes (Mark Ruffalo) is actually their mastermind but they don’t know it. But the revelation comes like a whimper instead of a bang. Big whoopee. And the guy who seems to be at the heart of justice, Thaddeus Bradley (Morgan Freeman) - a kind of muckraker who exposes magicians’ tricks and has use for the FBI - ends up permanently jailed. So, once again, in popular culture, the immoral triumph, the moral despised.
﻿
Posted by Windsor-Detroit Cinephile at 12:10 PM No comments: Links to this post

Before Midnight is Richard Linklater’s third in a series about Jesse (Ethan Hawke) and Céline (Julie Delpy), after 1995’s Before Sunrise and 2004’s Before Sunset. Now these would be lovers are a couple living in Paris but vacationing in Greece. Unlike the two previous films which were imbued with tantalizing romanticism, Before Midnight is a kind of Gen X version of Bergman’s Scenes from a Marriage (1973). Whether that was Linklater’s – and the two stars', who co-wrote the movie – intention, is a guess. Probably not but it sure comes out that way. In the previous films the two are romantically drawn to one another despite their very brief rendezvous (Vienna in the first film and Paris in the second) owing to travel constraints, mainly because Jesse, an American, had to get back to the States. Before Midnight doesn’t at all discuss how Jesse and Céline end up a couple – with two kids no less – nine years after their last meeting (each film is set nine years apart). But it’s easy to believe. The problem is that this film eschews romanticism for couple angst. Sure the Peloponnese peninsula makes for a lush and romantic setting but the romance has largely popped out of this relationship. And it’s too bad, since this is what we’d come to expect from Linklater’s three linked movies. The problem is that Céline feels taken for granted (heard that before) in a relationship where Jesse, author of two critically acclaimed books, is the star. She’s family-bound with the kids and picking up the socks while Jesse can philosophize with walks under the olive trees. Jesse protests of course. But he doesn’t sound too convincing. When Jesse says he wants to spend more time with son by first marriage Hank in Chicago Céline sees it as a way for him to get out of their relationship. And she balks at the idea of moving to any place as crass as the U.S. Midwest. Besides, her environmental career is at a critical juncture and she wants to join the government where she can really make a difference. (Any thought that Jesse may have been sacrificing for her? Just wondering.) This movie isn’t all dour. And to say it is isn’t to suggest it’s a poor movie. In fact it’s a very good movie. The acting – especially Delpy’s – is absolutely terrific. These are genuine-to-life scenes that are highly believable in tense, argumentative situations. As well, Linklater - known for his long shots – keeps them coming with several very long takes – terrific.﻿
Posted by Windsor-Detroit Cinephile at 11:02 AM No comments: Links to this post

So so for what I saw

I only made it to three films at Cinetopia this past weekend. I’d wanted to catch more but life catches up to you. In any case Saturday’s three were Big Sur (at the Michigan Theatre), and Broken and Pieta (at the DFT). Big Sur (Michael Polish, 2013) was the best, a contemplative, stream of consciousness take on famed beat novelist Jack Kerouac’s sojourn to the idyllic coastal region to escape the press and fans after his highly successful publication of the iconic On the Road. But his trip doesn’t provide real escape and Kerouac descends into more and more drinking, which would eventually kill him. Jean-Marc Barr (a star in many Lars von Trier films) is a dead ringer for Kerouac. The filmmaker captures the period (late-1950s) well and the dreamy cinematography fits the area’s beauty and Kerouac’s dissonance of mind. But I’m not terribly attracted to this type of low key drama with more voiceover narration than actual scene acting…..Next was Broken (Rufus Norris 2012). On a North London cul-de-sac lives three very dysfunctional families where tragedy besets all. The acting is fine but how much angst can one film have, let along three side-by-side neighbours, where the police are always being called, and anger and conflict keep exploding? Just a little over the top by this first time film director.....Finally, Pieta (2012) (picture above) by South Korean shock maestro Kim Ki-Duk, which won top prize at last year’s Venice Film Festival, in another in his uber violent series. Only the way this was hyped I was expecting more violence and more suspense – well more something, given it won the Italian festival’s top prize (really?!). Lee Kang-do (Lee Jung-jin) is a brutal enforcer for a loan shark who doesn’t have an ounce of mercy in his body. Violent, yes. But I have seen far worse from directors who specialize in violence as an art form. And, hey, the suspense could have been kicked-up a notch.﻿
Posted by Windsor-Detroit Cinephile at 12:47 PM 1 comment: Links to this post

About time Detroit had a major film festival 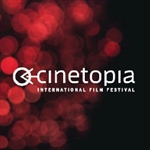 Cinetopia, the new Metro Detroit film festival, expands to the city of Detroit proper for its second year. The first year saw films only in Ann Arbor but this year’s edition will show flicks in AA and the Detroit Film Theatre at the DIA. What is significant about this fest is that it means the metro Detroit area (I know A2 doesn’t necessarily think of itself as being in metro Detroit but I’ll wrap the two together for convenience sake) is a bona fide feature length film festival, something new in this market. Even little old Windsor has a decent feature length film festival in WIFF. Up to now the only movie festival in metro Detroit was the Ann Arbor Film Festival, which shows experimental films. What’s more, Cinetopia features hand picks from the world’s most prestigious festivals including Sundance, Toronto, Cannes and Berlin, all the more reason to go. Hopefully Cinetopia will keep expanding. It’s about time Detroit had a festival to call its own.  More about the festival and schedule at www.cinetopiafestival.org﻿
Posted by Windsor-Detroit Cinephile at 11:18 AM 1 comment: Links to this post 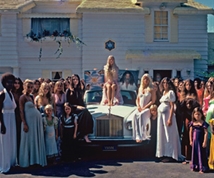 And I thought I knew just about everything of the 1960s/70s hippie counterculture movement. Little did I know. The Source Family. What the hell is that? Maybe because I wasn’t living in L.A. at the time (or ever!) or didn’t read enough back issues of the LA Free Press. But The Source Family was an institution, if that sounds ironic, along the Sunset Strip in the early 1970s. This was a hippie cult par excellence and this documentary by Jodi Wille and Maria Demopoulos of the same name presents a highly fascinating depiction of it. It started with the Source Restaurant, which had its origins in the early 1960s along the same strip, and reputed to be the first vegetarian resto in the US. It was started by James Baker, an ex-WW II marine and Jujitsu expert with a charismatic personality, to say the least. Influenced by the beats, natural lifestyles and vegetarianism, he created the restaurant, which soon became the in spot for Hollywood celebrities like Goldie Hawn and Steve McQueen. There’s a spoof of it in Woody Allen’s Annie Hall (1977). Baker was also influenced by eastern religion. But anyone who had any recollection of the era – intimate or at arm’s length – would know that the entire hippie experience encapsulated reverence for eastern spiritualism as well as western mysticism and of course sex drugs & rock ‘n’ roll. The Source commune grew into hundreds of people passing in and out of the family's houses in the Hollywood Hills. There were tons of other hippie communes in that era but what took this further was the almost cult like devotion of members to Baker’s Father Yod persona. He was indeed adopted as their spiritual father and ended up marrying numerous female followers, which led the more sceptical to label him simply a “dirty old man.” But this wasn’t a religious cult like Jim Jones’s Peoples Temple or the Children of God or Scientology. There seemed more openness and a less rigid structure as befit the go-with-the-flow hippie mentality. This cult had it all. Religion, vegetarianism, collective living, natural healing, orgy-like sex and of course beatific smiles on the faces of all these gentle flower children. And did I mention, a rock and roll band that recorded dozens of albums, now highly valued collectors’ items as artifacts of high psychedelic music?…..This film will be screened next week at the Cinetopia festival in Ann Arbor and Detroit. It’s absorbing and the best doc I’ve seen in quite a while. Go to www.cinetopiafestival.org﻿
Posted by Windsor-Detroit Cinephile at 5:30 PM No comments: Links to this post