The sublime films of Eric Rohmer

Last week, courtesy of The Criterion Channel, I reacquainted myself with a couple of the films of French New Wave auteur Eric Rohmer. Virtually all the New Wave (Nouvelle Vague) directors – Jean-Luc Godard, Jacques Rivette, Claude Chabrol, etc. - are great, each in their own way. Rohmer has a special place in my heart because of his slow, studied – almost analytical – dissections of human relationships. I find his films totally absorbing. I caught two films, Love in the Afternoon from 1972 and The Green Ray from 1986. The first is from his “Moral Tales” series of six films. The second from his “Comedies and Proverbs” series. Love in the Afternoon stars Zouzou (photo above), one the 1960s pop icons whose friends and lovers included George Harrison, Brian Jones and Bob Dylan. She stars as Chloé, who shows up one day and seeks to seduce an old friend, Frédéric (Bernard Verley), who is married. The film incrementally takes us through a growing intimacy between the two, during afternoon coffees, walks in the park and shopping trips. Frédéric is beguiled but also committed to his wife. The film turns on his drawn-out moral dilemma, depicted as a slow dance with temptation, and we can almost see the gears turning in the character’s perplexed but entranced mind. The next film was The Green Ray. The plot is built around one woman, Delphine’s (Marie Rivière) desire for perfection. Who else would make a film about a woman’s desire to find the perfect vacation? But after being dumped out of a female friend’s travel plans, Delphine is forced to find an alternative to spend the French holiday month of August. She’s continually frustrated, annoyed and dismayed at the offerings made by relatives and friends. And when she does choose a destination, her encounters end up being vapid and unsatisfactory. Bear in mind the dialogue was basically made up by the characters during the shoot. Does this all this seem like watching paint dry, as once dismissed by Gene Hackman's character in the 1975 film Night Moves? If you’re interested in psychology and the subtleties of how the mind works – not to mention romance and how men and women interact – every stroke of that paint is endlessly fascinating.
Posted by Windsor-Detroit Cinephile at 4:32 PM No comments:

What will a post-Covid 19 world look like for cinemas? 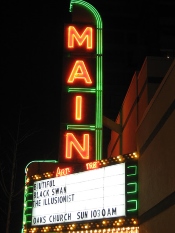 So, what will the movie going experience be like after the Covid-19 pandemic ever ends? I suppose that depends on various scenarios all of which relate to time. If North America goes “back to work” say, May 1, May 15 or even June 1 or July 1, somehow, I think most bricks and mortar movie palaces – okay, multiplexes – won’t be terribly harmed. If beyond that it’s a mug’s game. For example, it seems far-fetched that huge corporate owned theatres will go out of business - brands like Cineplex, AMC, Emagine and MJR. A lot may depend on the movie going public. The pent-up demand for a communal theatre-going experience may be absolutely huge, and large crowds may once again descend on the local bijou. (Is there only so much stay at home Netflix viewing someone can do?) But for smaller independent theatres that’s the question. Detroit’s Midtown-based Cinema Detroit this week received a $10,000 grant from filmmaker Ava DuVernay (Selma, 2015). But will that be enough? What about Landmark’s Main Art Theatre in Royal Oak? It’s Landmark’s only theatre in metro Detroit, with three large halls and on my many visits, crowds that often fill less than half the seats. Will the art house crowds storm back and fill more seats than ever? Or have Netflix, the Criterion Channel, YouTube and other online sites made movie watching so damn easy – especially for art house enthusiasts – that driving several miles to a cinema just isn’t worth it anymore? Then there's another question. Even when the worst of the epidemic passes, will people still fear going to public places? Moreover, how will a “return to normal” be done? Will there still be some “social distancing” as society gradually opens up? For example, will moviegoers still have to stand two meters (six feet) from one another as they line up to buy tickets or will tickets only be sold online? Will patrons only be able to sit in every third seat, marked by an “x?” Will concession stands remain closed? Finally, what of the movies on offer? How severely has the production side of the industry been affected by the coronavirus shutdown? It’s only been one month but an industry closure could drag on two three or several months. This will mean fewer new releases though admittedly there will be a backlog of films that had been scheduled for spring and put on the backburner. (I was especially wanting to see Wes Anderson’s The French Dispatch and Mick Jagger in Giuseppe Capotondi's The Burnt Orange Heresy.) So, just like presumed calls for the public to support en masse restaurants that reopen after the pandemic let’s also make a point of supporting movie palaces and, once reopened, cheerfully head back to the big screen.
Posted by Windsor-Detroit Cinephile at 4:15 PM No comments:

A deep dive into a Brave New World

David Bolt’s Human Nature - originally set for theatrical release last week but due to theatre closures is now available to rent or buy on Apple-iTunes, Amazon and other platforms (it screened at the Windsor International Film Festival last fall) – is a deep dive into science, in particular the realm of genetic engineering. But it’s hardly science fiction. In fact, it deals with the 2013 breakthrough of the very real genetic engineering tool known as CRISPR, which may have the power to  modify genes for an extraordinary number of purposes - from altering human deformities to curing diseases, reversing the aging process and even bringing back extinct species. At first the film seems quite technical and fit mainly for science nerds (the image of The Big Bang Theory did come to mind at one point). But if you hang in you’ll be part of a select audience that is learning about what may be the most cutting edge technology on Earth. As one researcher says, in terms of its impact on human civilization, “after two billion years this is, in a sense, the end of the beginning.” CRISPR is an acronym for the tool - molecular “scissors”- which can cut and paste DNA and therefore alter all life forms. What if we could bioengineer so that children aren’t stricken with diseases or eliminate patients' extreme pain from cancer? In a sense, the science, or science fiction, has been around 100 years, from the Eugenics movement of the 1930s to Aldous Huxley’s Brave New World. And, yes, as scientist Ryan Phelan sighs, there is Jurassic Park (Steven Spielberg 1993). But while much of this was science fiction, now the tool exists; it just needs modification although Chinese scientists in 2018 for the first time edited the genetic code of twin girls. Some of the leading researchers in the field are interviewed – Jennifer Doudna of UC Berkeley, George Church of MIT, David Baltimore of Caltech. As are scientist-businesspeople who have created companies where geneticists can purchase the proper gene-splicing tools for the alterations they want to make. The film intersplices (sorry) a look at the real science and how it works – it’s technical but hang in there – with the ethical debate, even and largely within the scientific community. Do we want to “play God?” But it seems this “Brave New World” will eventually win out, especially within the next decade or two, as geneticists perform increasing gene editing so that, babies, for example, will grow up to be free of Down syndrome. As one mom tearfully implores a scientific committee: “If you have the skills and the technology to fix these diseases then frickin’ do it!” One obviously can’t help wondering if CRISPR could be the answer to a breakthrough against the ravaging COVID-19 disease. Ironically, the film opened on Friday March 13 in New York and San Francisco, one day before theatres began closing everywhere because of the outbreak.
Posted by Windsor-Detroit Cinephile at 1:53 PM No comments:

My winter festival got cancelled

Just a short note to say how I regret that one of my favorite winter pastimes, attending the Gasparilla International Film Festival (GIFF) in Tampa, Fla., didn’t occur this year. The obvious reason is the omnipresent virus. GIFF almost came off. I attended the opening night party (photo left) where festival president Tammy Briant Spratling, gave a rousing introduction to this year’s lineup. That was March 11. The festival was to run March 17 – 22. On March 13, when the coronavirus scare had begun descending in full force throughout North America and events hither and yon began getting cancelled, GIFF also announced its cancellation or at least postponement. I left Florida, where I’d hoped to stay until the first week of April, March 18th. This would have been GIFF’s 14th year. The opening night film was The Lovebirds (Michael Showalter), a dramedy and murder mystery, and the closing film would have been Synchronic (Justin Benon & Aaron Moorhead). Regrettably the festival’s main theatre in the traditional funky Cuban neighborhood of Ybor City, had closed, a victim of low theatre attendance throughout the year. But we were expecting an even better location at the nearby Hillsborough Community College performing arts center. Here’s to a hoped for rescheduled 2020 event and a whole new 2021 festival, hosted by an always upbeat and enthusiastic organizing committee.
Posted by Windsor-Detroit Cinephile at 3:34 PM No comments: