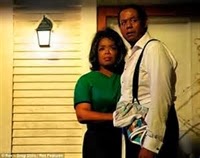 So now I know…..It was kind of bugging me why the movie’s called 'Lee Daniels’ The Butler, as opposed to, you know, just The Butler, a film which I saw earlier this week. According to The Hollywood Reporter Daniels, who earlier directed 2009's Precious: Based on the Novel ‘Push’ by Sapphire (another long-winded title to say the least) and producer of Monster’s Ball, had to call it that because of a copyright issue. In fact Daniels says he didn’t “feel so good” about his name being in the title, and one can sort of sympathize unless you're an egomaniac, which I was wondering if he was. What happened was that Warner Bros., wouldn't you know it, had made a short film named The Butler, ah, way back in 1916 (did the world exist then?)  and, wouldn't you know it, protested the new film using this title. (Guess now people will be knocking the doors down to see the 1916 film!).....The new Butler is a solid enough feature, based on the true story of Eugene Allen, who served in the White House under eight presidents, and therefore saw close-up the modern civil rights era unfold. The movie of course stars Forest Whitaker who plays butler Cecil Gaines and Oprah Winfrey who plays his wife Gloria. It has done well at the box office (in sevenh place this week) after opening in mid-August, and hits most of the presidential tropes of the post-war era, from Eisenhower (Robin Williams) sending troops to Little Rock to integrate schools, to the attack on the Freedom Riders  (young activists who sought to integrate the South and which just so happens to include Gaines’s son), to President Kennedy’s famous ailing back problems, Lyndon Johnson’s boorish bathroom diplomacy, Richard Nixon’s connivance, and Ronnie Reagan’s civil rights two-facedness (fair-minded in person yet opposed to South African apartheid sanctions). The film is a bit clichéd this way but what are you going to do? I have to admit I was surprised that the White House had/has so many butlers. The film's weakest aspect? Casting. None of the presidential figures looks the least like the real people. The best casting by far is Jane Fonda as Nancy Reagan. She even has Nancy’s famous walk down solid.
﻿
Posted by Windsor-Detroit Cinephile at 5:13 PM