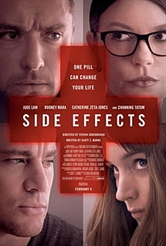 Side Effects (Steven Soderbergh) has an intricate plot and all the twists and turns of Hitchcock’s best, not that I’m necessarily comparing it with Hitch’s The Man Who Knew Too Much (1956) and Vertico (1958). But the comparisons are there for all to see. Even the opening and closing scenes have a Hitch quality, in this case to Rear Window (1954). The movie opens with a very slow pan on to a Manhattan apartment house, and closes with the camera moving in the opposite direction from an equally imposing building, a psychiatric hospital on New York’s Wards Island. The first scene is especially memorable for a kind of haunting serenity. Instead of James Stewart being set up as in those earlier Hitchcock classics we have Jude Law as Dr. Jonathan Banks, a court-appointed psychiatrist to work with a very troubled woman, Emily Taylor (Rooney Mara), who apparently has attempted to kill herself. Without giving too much away – and the plot weaves tightly innumerable times over the next hour and a half – Banks becomes a patsy, is disgraced, assumes the role of investigator, and ultimately is vindicated (I fear I’ve given away too much already) – in a story about perception, fakery, high finance, and – you’ve surely heard by now – the effect of psychiatric drugs as per, duh, the film's title. Law is terrific as an intelligent but not pretentious physician who remains clear of vision throughout his predicament. Rooney Mara (Lisbeth in The Girl with the Dragon Tattoo) is a convincing enough deceiver (I was deceived) and Catherine Zeta-Jones as fellow shrink Dr. Victoria Siebert is a cool customer. One might conclude the movie is a slam at the big moneyed drug industry. We all know the pharmaceutical industry is powerful and for Soderbergh to pursue that line would have been a cliché. Instead, this film is about evil, pure evil, just as Hitchcock’s were.
﻿
Posted by Windsor-Detroit Cinephile at 6:22 PM