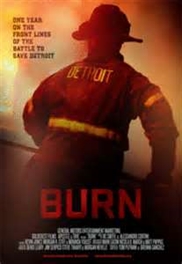 It's always great when the mainstream theatres - in Windsor and the county that's all of them - break from the screen routine and show a movie that's just a lttle bit different. That will happen at Silver City on Walker Rd. in Windsor, the week beginning March 22, when a new documentary, Burn (Tom Putnam) opens. Burn follows a fire company in the Detroit Fire Dept., in a city notorious for fires. Having seen it - an interview and more details will be coming - I can vouch this is a film packed with action (how couldn't it be given the subject, but still...) with a great rock and roll score. It should be checked out. Tickets can be ordered from www.detroitfirefilm.org/events

I bumped into Stuart Selby, coordinator of the annual Windsor Jewish Film Festival, at a recent event. He told me the fest will be coming up April 29 - May 2 at Cineplex Devonshire, its usual location. More details coming. This is a great festival with films - often with recognizable stars - that have wide appeal beyond strictly the Jewish community.

And further in May its Windsor's long running (since 1994) experimental film extravaganza,  Media City Film Festival, May 21 - 25.
Posted by Windsor-Detroit Cinephile at 2:06 PM