The joys of U.S. moviegoing 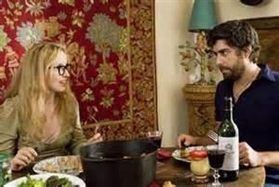 I’ve been seeing a lot more movies in the States lately and I must say the experience is much better than in the Great White North (make that South since Windsor is below Detroit). There are more matinees (at considerable discounts) and more late night screenings. For example, tomorrow I plan to see the new Dustin Hoffman-directed film Quartet at the Uptown Birmingham. The latest start is 11.15 pm. How perfect for a Saturday night! Then there are the deals. Regardless of when you go you can be entitled to free concession refills. For example, at MJR Partridge Creek, at a matinee, upon ordering two substantial pops (“soda” in the U.S.) and a large popcorn, we were entitled for free refills for each – not that we needed them! And when buying the tickets we were given a coupon to a restaurant in the mall: buy one entree get the second one free. Marketing, marketing – works wonders. But this is the U.S., of course, where they know how to do business and make consumers happy.....It seems all major U.S. (MJR, AMC) chains feature announcements or graphics on the screen advising the audience not to use cell phones or talk, and it seems to work. Not so for Cineplex, Canada’s major chain, where a spokesman told me the chain didn’t feel it was necessary.
I had a curious experience this week watching a DVD of French actress & director Julie Delpy’s 2007 film 2 Days in Paris, the prequel to her 2 Days in New York, which came out last year. The film is actually better than the second one (starring Chris Rock). The camera work and scene cutting is better and the script was funnier and more imaginative. Her dad Albert Delpy stars in both. The problem: there are several long narratives where we listen to Delpy’s thoughts about what is going on around her. While the rest of the movie is appropriately subtitled when French is spoken, her thoughts are not, which leaves a non-French speaker out of many critical junctures as the story moves along, including the all important last one. (Picture shows Delpy with co-star Adam Goldberg)
A German friend told me about a New Year’s Eve classic that has been shown for decades on TV in European countries. It’s a 1963 British sketch called Dinner for One. It’s a lark about an old matron who sits down to dinner with her four “friends” – whom she thinks are there but are all dead - and butler James. For each course there is an obligatory toast and James, pretending to be each of the diners, has to down the guests’ drinks, with predictable results. You can catch it on You Tube at http://www.youtube.com/watch?v=6lzQxjGL9S0
﻿
Posted by Windsor-Detroit Cinephile at 10:32 AM