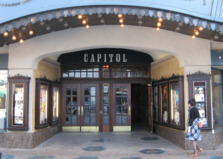 With an expanded schedule bringing the festival to a full week the Windsor International Film Festival’s 2012 edition, which concluded Nov. 11, seemed to run smoother than ever. Here’s an analysis of this year’s edition:

- The ticket lineups of past years seemed long gone and the whole ticketing process streamlined. It was easy for pass holders to drop by the designated office on the west side of the Capitol Theatre (left) to order daily tickets. Meanwhile those wanting to purchase individual tickets or passes went to the main festival office at the opposite corner. Those in line inside the Capitol were people with tickets – and only tickets - waiting for theatres to open.
- It was nice to have the festival add extra screenings, seemingly at will, as festival goers requested. That’s on top of running more screenings of certain films, the lack of which was a complaint about the festival in the past.
- I still miss having the Palace Cinemas around the block as the WIFF’s second theatre. The seats were comfortable and the environment nicer, even if there might have been gum on the floors. That’s all in the past of course as the Palace gave way to the new Windsor Star offices. BTW has anyone else noticed that the exterior of the Star building looks an awful lot like the mid-century addition of the Star’s former Pitt Street location? One might have expected a more contemporary look.
- Despite the $1.8 million in renovations the city put into the Capitol (repaired roof, enhanced stage), for the audience it really is the same old building. And that’s unfortunate. I realize the city has only so much money and the priority is preventing leaks, but the seats in the Capitol are terrible. Most people complained about those in the smaller Kelly theatre, which seem shoehorned in. And of course those in the Joy theatre are temporary because the Joy doubles as a reception room. But even the seats in the main Pentastar can give a royal pain in the derrier.
- A lot of those attending seemed to be retirees, and we’re talking Baby Boomer retirees. It seems this is the way Baby Boomers like to spend their newfound retirements – hanging out at film festivals. It sure beats lining up for the Early Bird Special.
- The WIFF audience still is overwhelmingly Canadian. WIFF organizers should really step up marketing/publicity in the U.S. The Detroit megalopolis has more than four million people and there is no similar festival in that area
﻿
Posted by Windsor-Detroit Cinephile at 12:39 PM