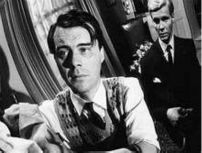 The Servant, which stars Dirk Bogarde and Sarah Miles, has an almost perfect exactness to it. The 1963 Joseph Losey-directed film features a close-up study of the subtleties of personality, class warfare, the dynamics of interpersonal relationships, and last but not least, sexual politics. In fact, you might say every scene in this movie is perfect until, that is, Tony (James Fox) kicks Bogarde as his manservant Hugo - and Hugo's lover Vera (Miles) - out of his house.....When the movie opens Fox is a moneyed young bachelor moving into a svelte London house. He needs a servant (apparently all well-to-do gentlemen in early-1960s Britain require one). Hugo Barrett answers the call, with impeccable credentials and mannerisms to match. The problem is that Hugo is so calm, cool and collected - and so excellent at his job - that he generates an incrementally dominating force. But the narcissistic Tony hardly notices. He develops a good working relationship with Hugo.....Are there hints of homosexual attraction as many critics claim? Not yet......Enter Susan (Wendy Craig), Tony's girlfriend, who is suspicious of Hugo from the start. She thinks him presumptuous and overbearing and has no qualms about saying so. Hugo (a sociopath?), though, takes it in stride and maintains a professional elan. But behind her back his face has a sardonic smirk. Susan confronts Tony about her reservations. Tony dismisses them. Until, that is, he is manipulated by Hugo and Vera, whom Hugo (with Tony's permission) had invited for a short stay, lying to Tony that Vera was his sister. Hugo and Vera waste no time taking advantage of the household. Still, Tony, remains nonplussed. Why would he not be, after Vera comes down the stairs and offers herself up to him on the kitchen table?.....Every scene in this movie is a study in the psychology of the characters, catching moods or thoughts by the inflections on their faces and in their voices. Not a second of film is wasted. The score, by John Dankworth, is the perfect sprightly counterpoint to the film's menacing darkness. And over and over again we hear Cleo Laine's "All Gone" (lyrics, as is the screenplay, by Harold Pinter), a song that seems to sum up the pointlessness of everything ...... Every scene in the movie seems perfect. Until, that is, the falling out between Tony and Hugo (and Vera) after Tony and Susan come home to find the other two frolicking in Tony's bedroom.....The movie seems like it should be over at this point or soon after. But then we see Tony and Hugo running into each other in a pub drowning their sorrows in suds (each of their lovers has left them). Eventually they renew acquaintances and realize there was a bond between them after all. Hugo moves back in. But now the rules are out the window. Hugo no long dresses as a servant. He's now a roommate and the two have an equal relationship. It seems one of love-hate but the same as brothers love and hate one another. Nevertheless there are some strange goings-on. A brood of whore-like women drop by one night. And when the estranged Susan (who had broken with Tony over his love-making to Vera) makes an appearance she becomes part of the bevy.....The last half hour of the film is taken up with the frat boy antics of Tony and Hugo cursing each other and throwing things. But the film is unclear as to what the women represented and why Tony got rid of them. Is it a rejection of heterosexuality in favour of homosexuality? At this point the film has become too confusing and the viewer is liable to ask, who cares?.....But for about three-quarters of this movie there was a hugely entertaining story where every look, word and silence mattered, a rarity in any film.
﻿
Posted by Windsor-Detroit Cinephile at 9:41 PM