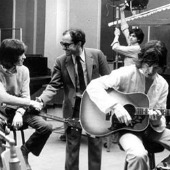 Watching Jean-Luc Godard’s Sympathy for the Devil (1970) on the weekend was like being hurtled back in time to the late 1960s when protest was all the rage and revolution definitely was in the air. Godard, the most famous of the French New Wave directors - and who became increasingly political (read Marxist or even Maoist) in his leanings as a kind of agent provocateur of the arts – made this movie about the Rolling Stones and combined it with some sort of treatise about Black Liberation, the Vietnam War and American imperialism, all the radical touchstones of the day.....The centerpiece, though, is shots of the Stones rehearsing and then recording Sympathy for the Devil, one of their most famous songs. Interspersed are cuts to scenes mainly of a junkyard along the Thames River with a group of Black nationalists spouting revolutionary slogans and eventually kidnapping three white women and murdering them. Meanwhile a trendy Carnaby Street belle is running around London spraying graffiti on walls and cars.....I’m not much into supporting graffiti (see my July 3 post about Banksy and Exit Through the Gift Shop) so of course I took disfavour to these images. But I must admit one in particular was funny, that of spray painting the letters S-O in front of V-I-E-T-C-O-N-G. Get it? The Soviets were supporting the Viet Cong. Of course the anti war Left (of which Godard was a member) would never have deliberately made this connection because the war was always portrayed as a civil war with the Viet Cong being the good guys, so it seemed Godard was unintentionally (or maybe not) undermining the Communist world’s own form of imperialism.....In any case, these images of revolutionaries along the streets of London were rather boring, though I’m sure at the time they must have provided a certain frisson to the audience. The best parts of the film were of the Stones actually recording. You felt almost like you were in the studio as they slowly revved-up the tempo of Sympathy, took smoke breaks, and yakked casually among one another, oblivious to Godard’s camera.....Having just read Keith Richards’s autobiography Life, it’s quite amusing to watch the film. Richards describes Godard as an “odd personage,” ”Nobody, I think has ever quite honestly been able to figure out what the hell he was aiming at,”  “I couldn’t believe it; he looked like a French bank clerk,” “The film was a total load of crap,” “I think somebody slipped him some acid and he went into that phony year of ideological overdrive”..... To top it all it appears Godard wasn’t much of a rock and roll fan. The movie’s ending credits spell Richards’s name incorrectly, as “Richard” not “Richards.”

Meanwhile, I also watched Rabbit Hole (John Mitchell Cameron, 2010) starring Aaron Eckart and Nicole Kidman. I don’t think I’ve seen Kidman in a less glamorous role. She played a wan, angst-ridden suburban housewife recovering from the death of her child. Sure, her bleached-out look might have just been designed for the role. Perhaps it’s just me but, at 44, is she starting to lose her looks?
Posted by Windsor-Detroit Cinephile at 2:22 PM