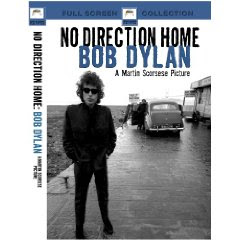 There is the 2004 book Chronicles Vol 1, Bob Dylan's look back on his career, a fascinating read for anyone interested in a first-person description of the early-1960s Greenwich Village coffee house scene and its cast of characters, Dylan's encyclopedic knowledge of music, the influences which nudged him in various career directions (what was behind the abstract imagery of those classic mid-'6os hits like Ballad of a Thin Man and Desolation Row?) and perhaps most fascinating, Dylan's candor with regard to his own artistic roadblocks. I encourage you to read the book. But if you don't, see this film. Best, read the book and see the firm. They act as companion pieces. Just as Chronicles details on the printed page Dylan's emergence from the backwaters of northern Minnesota and his travel odyssey to New York to visit Woodie Guthrie and firmly implant himself in the Village, from where he launched his career, Martin Scorsese's 2005 No Direction Home (not be to confused with Todd Haynes's very good 2007 I'm Not There with Cate Blanchett the stand-in 'Jude' character for Dylan) does a lot of the same on the screen. Clocking in at just over 200 minutes the documentary also focusses on Dylan's growing up in Hibbing, Mn., his early foray into music (including playing with Fargo ND's Bobby Vee), his epic (well, that's what it seems) journey to New York, his early club performances, the personal influences on his career by such people as Dave Van Ronk, Suze Rotolo, John Hammond and Joan Baez. Then there is his signing with Columbia and his breakthrough fame. There are plenty of scenes of the "folkie" Dylan at the 1963 Newport Folk Festival. And a lot of scenes from Dylan's famous (or infamous) trip to Britain, after he went "electric," playing to cries of "traitor" at packed concert halls and even a death threat by someone who wanted to shoot him. Personal interviews with Dylan and a wide range of friends, musicians and music industry types who played key roles in supporting and launching his career, are intermingled with some terrific footage from the Greenwich Village scene of that period along with performances in such places as Newport and England, the latter with classic shots of Dylan in sunglasses with his band lounging in the back of his Rolls Royce as it plys the English countryside. The book and the film do two things. They demonstrate just how incredibly ambitious Dylan has always been not only a musician but as an entertainer in very much the commercial showbiz sense, as well as his stone cold drive and burning focus to propel himself forward. The second is that Dylan, often thought of as a "political" singer, is nothing of the sort. He casts lots of water on those assumptions. If anything he is a minstrel, a poet, a writer and musician whose lyrics and songs are what they are or how someone interprets them - straightforwardly or in a metaphoric or surreal way. He and his music are what they are. Intrepret them as you wish. This is what the book and the film reveal.
Posted by Windsor-Detroit Cinephile at 4:42 PM