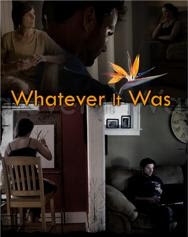 Being chief of staff for Windsor's mayor doesn't allow a lot of free time to act in movies. So Dylan Pearce, director of the recently-released Windsor-made film Whatever It Was, accommodated Norma Coleman by shooting the scenes she performs in, during evenings and on weekends. "Dylan was great working around my schedule," she says. It was Coleman's first film role and she cherishes the memory. "It was a great experience. I'd love to do it again if I had the opportunity." Coleman is well known to local audiences from her roles in several theatre companies but especially the Windsor Light Music Theatre. Originally from Toronto her first role after moving to Windsor was in Theatre Alive's Birth of a City based on the Carl Morgan book about Windsor's history. In 2007 Coleman played Mrs. Robinson in Theatre Windsor's production of The Graduate. She played opposite Christopher Lawrence Menard who had the role of Benjamin. Menard wrote Whatever It Was. Pearce came to see the stage production and met Coleman. Coleman's role in The Graduate dovetailed perfectly with her older woman character in Whatever It Was. The film is an adult drama about love, temptation and betrayal. Asked if acting in film is different or more difficult than acting on stage she said it's different. "In a theatre production you rehearse from beginning to end and you flow right through from the first act to the second act," she said. The film shoots were entirely out of sequence with, for example, the beginning of the film shot at the end. That requires relying on memory. A character might be in a scene where she is coming out of a room. But the continuation of the scene is shot two weeks later. That takes not only memory but keeping "the same sort of energy," Coleman says. And, on stage, an actor has to project her voice so those at the back of the hall can hear. "In film it's more natural," she says. "It's hard to explain but it's just a more subtle performance." Next up for Coleman is her role in 12.13 Productions' March female version of The Odd Couple (she plays "Olive" Madison) and in June the same theatre company's production of WIT. Coleman has the main role of the English professor suffering from cancer played in the made-for-TV movie by Emma Thompson.


Posted by Windsor-Detroit Cinephile at 6:36 PM